“The beer is getting rave reviews in Syracuse,” David Katleski, owner of Empire Brewing Co, says, “and we intend to sample Two Dragons throughout New York State over the coming months while refining the taste”.

After an initial trial shipment of 12 kilograms of tea, Empire Brewing and Shaanxi Jingwei Fu Tea Co have signed an agreement for a much larger second shipment of tea to make the beer a permanent product.

Ji Xiaoming, president of Jingwei Fu Tea Co and chairman of the Shaanxi Tea Association, says the collaboration was a “breakthrough” as it introduced Chinese tea to a completely new consumer base.

Although the Empire Brewing contract only accounts for a fraction of its annual tea production of 2,800 metric tons, Jingwei Fu is now exploring selling their branded teas in the US market at a time when traditional wholesale tea exports are facing structural difficulties.

Last year, Chinese tea exports plunged 7.5 percent year-on-year to 302,500 tons, according to the Chinese Chamber of Commerce of Foodstuffs and Native Produce. However, the value of tea exports experienced moderate growth of 2.1 percent to reach $1.27 billion.

“With rising production costs in China and competition that is likely to intensify, Chinese tea producers have to find new strategies to boost Chinese brands and their sales on the global stage,” says Ji.

The vast majority of Chinese tea exports are sold at wholesale prices as raw materials used for blending. In 2014, over 80 percent of exports were low-grade green tea, with Africa, Europe and Russia being the main markets.

“The average export price of Chinese tea was around $4 per kilo last year, which was unprofitable or even loss-making for producers,” Wang says.

Rising costs in China have put its producers at a disadvantage against competitors. In 2013, China was the second-biggest exporter at 322,600 tons behind Kenya’s 494,400 tons and marginally ahead of Sri Lanka’s 319,600 tons, but is expected to drop to third place when Sri Lanka releases its export figures for 2014.

A problem for Chinese producers, according to Wu Jing, editor-in-chief of tea portal website chayu.com, is the difference between the domestic and international tea markets.

“The domestic market values low-production, handmade teas but the global tea market prefers mass-produced teas that are standardized in quality and taste,” he says. “Export teas are grown specifically for that purpose and not consumed domestically.”

“More should be done to market higher quality green and fermented teas, which China is renowned for abroad,” Wang says.

However, experts view reducing volumes and increasing prices of exports as the start of a shift in exporting higher-end teas.

In Canada, the tea import market is expected to grow 20 percent this year from its current size of $1.05 billion, said Erick Smithe, director of sales at premium Pu’er tea retailer 6 Mountain Teas.

Based in Vancouver, with its large Chinese community, 6 Mountain Teas expects 100 percent growth in each of the next five years from the 10 tons anticipated in 2015, Smithe said.

Although export figures may continue to trough in the short term, Wang says: “The future of Chinese tea exports will be bright if we continue to penetrate overseas markets with tea culture, something that is not reflected in trade figures.” 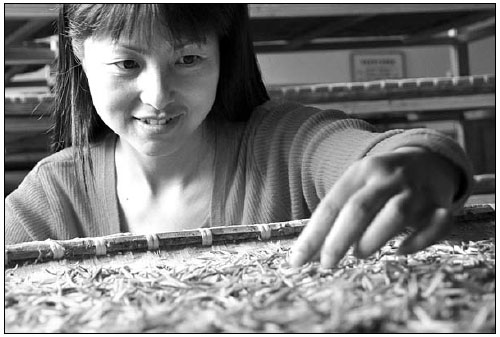 A woman sorts tea in Wuyuan county, Jiangxi province. Last year, the value of Chinese tea exports experienced moderate growth of 2.1 percent to reach $1.27 billion, according to the Chinese Chamber of Commerce of Foodstuffs and Native Produce. Provided to China Daily 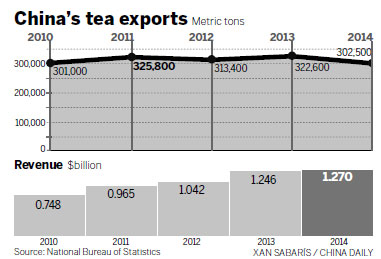 Chinese article published in the Mingpao Magazine in April 2015. Mon, Mar 16: It is one of the oldest and most sought after teas in the world, but Pu Era Tea is just starting to become popular in North America. Erick Smithe from 6 Mountains tea joins to explain everything we need to know about the popular tea.